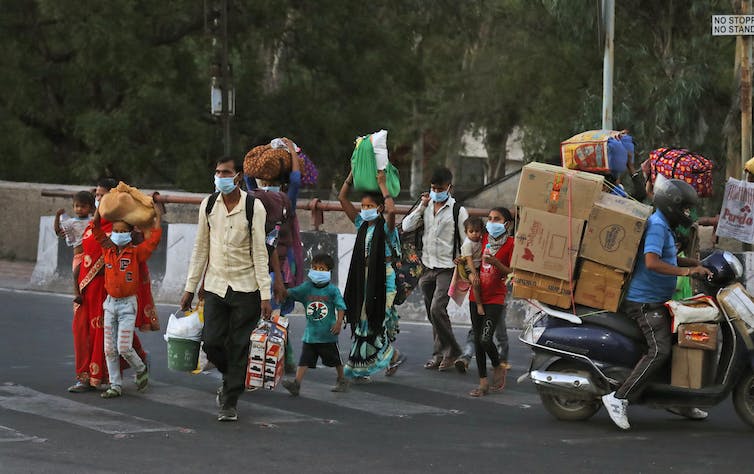 Long before the outbreak of COVID-19, a more pernicious form of social distancing was widespread across India: the Hindu caste system. In one form or another, this system – which has existed in the region for over a millennium – has long ensured social segregation based on one’s place in the hierarchy.

Outside of the four main groups that make up the caste system – Brahmins, Kshatriyas, Vaishyas and the Shudras – stand the Dalits, the so-called “untouchables” that number some 200 million. Members of that group, shunned for centuries as the lowest in society, are now at the forefront of the coronavirus pandemic – seemingly more at risk of infection due to their social status, and increasingly discriminated against for the perceived threat of contagion they pose.

Downtrodden and discriminated against

India’s caste system can be traced back over 2,000 years, but under British colonial rule, the system was reinforced and the categories became more rigid.

After India gained its independence from Britain, in 1947, its new constitution formally banned the practice of untouchability based on caste. But 70 years on, the system still permeates everyday life. It is especially evident in the realm of marriage. Hardly a day passes in India without a news report highlighting troubles associated with an inter-caste marriage.

Given the tenacity and pervasiveness of the caste system, it is hardly surprising that some of the worst sufferers of the COVID-19 pandemic are India’s “untouchables,” the Dalits. As a group they remain among the most downtrodden in India, with a disproportionate number of Dalits confined to mostly menial and low-paying jobs like construction work, or as janitors or tanners.

As a scholar of contemporary Indian politics who has written extensively about ethnic and sectarian conflict in the country, I have taken a keen interest in how the pandemic has hit India along caste lines.

Dalits have proved to be especially vulnerable to the disease for a range of reasons, chief among them poverty. The vast majority of Dalits are poor despite a vast affirmative action program that India put in place shortly after independence.

Consequently, even under the best of circumstances they have limited access to health care and any other form of social protection. During the pandemic their plight has only worsened.

Dalits are in large part casual laborers, often working in disparate parts of India far away from their homes. As a result, many found themselves stranded away from their families when Prime Minister Narendra Modi ordered a nationwide lockdown on March 23 – giving only four hours’ warning.

The Indian press has carried heartbreaking accounts of their struggles to return home. One photo, of a migrant worker crying by the roadside in Delhi as he tries to visit his dying son during the lockdown, has become a lasting image of the crisis.

Being a migrant worker in India, regardless of caste background, is a tough existence. Working conditions are harsh, the work often hazardous and pay mostly a pittance. Most migrants live in slum-like conditions, at the mercy of callous landlords. Even so, many send a large proportion of their earnings home to their families.

As a result, migrant workers rarely, if ever, have any meaningful savings that could enable them to tide over unexpected financial woes like the total economic shutdown of the coronavirus pandemic. This has meant scarce resources to pay for transportation home. Even money to recharge phones is hard to come by, cutting off communication between migrant workers and loved ones during the crisis.

Dalit migrant workers face an additional burden during the pandemic: social ostracism by higher caste members, even those in the same occupation as themselves.

The shunning of Dalits has not abated during this crisis. If anything, it has worsened, with some high-ranking members of the ruling Bharatiya Janata Party openly blaming the Dalits for spreading the coronavirus.

On May 25, the chief minister of populous Uttar Pradesh state, Yogi Adityanath, who is also a Hindu priest, suggested that migrant workers returning to his state were carriers of COVID-19, adding that the bulk of them were Dalits.

Opposition leaders were swift to condemn Adityanath’s remarks, but Modi and his national government have maintained a deafening silence on the subject.

As a result of such rhetoric, Dalit migrants trekking home – often on foot – can expect little by way of comfort or assistance from others because of their caste status and fears that they may be infected with the coronavirus.

I fear that in the immediate future, Dalits can expect little relief. To date they have received only minimal assistance from the government.

Five years ago, when Modi first swept into power, many Dalits believed his promises to uplift the country’s poor and duly voted for him. However, after the divisive leadership of his first term in office and their experience in the lockdown, many Dalits are now disillusioned with him and his Bharatiya Janata Party.

The coronavirus pandemic has underscored that India’s caste system is still very much in existence. In the eyes of many Indians, Dalits remain “untouchable” in a way that extends beyond current hygiene practices.

[Get the best of The Conversation, every weekend. Sign up for our weekly newsletter.]