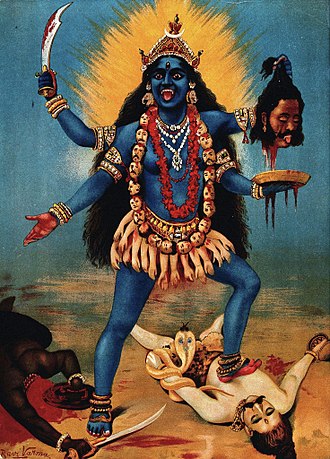 In my understanding of Hinduism, there is more in its nature of study and deliberations than just religion.

It is in this context that the chapter of Goddess Kali divulges an aspect of Hindu thought and philosophy that is apart from rationality, spirituality, morality, and myths.

Goddess Kali is an exciting and intriguing reading. In addition to her ritualistic adoration and worshipping, the study reveals her unique temperament that adds to the diverse outlook of Hinduism.

Kali’s appearance is dark blue with sunken eyes. In her long blood-red tongue sticking out in a ferocious image, Kali is typically portrayed with a scary and angry stare.

Her scantly covered body has a long garland of severed skulls of demons whom she destroyed on the appeal of her followers. And the short skirt she wears is the ripped-out arms of the defeated enemies.

Kali is often portrayed in the blood-thirsty and feral image. There is blood dripping from the chopped heads of demons that she holds in her arms. Her mood is terrifying and unruly. Indeed, not a pleasant sight when we see other Hindu goddesses nicely wrapped in colorful sarees and wearing beautiful jewelry.

Kali’s overall personality is revealed in an astounding story when she defeated a powerful demon by the name of Raktabija. Other female deities fought against him. They were able to wound him. But the story goes like this that every drop from each wound inflicted on him would turn into a clone of demon Raktabija. Thus, fighting against him by the deities meant increasing an army of his duplicates.

The deities finally gave up. They requested Kali to finish the demon because only she had the divine Shakti, meaning power, to kill him.

With gaping mouth, her tongue lolling out, having deep reddish eyes, filling the regions of the sky with her roars, Kali singlehandedly fought the battle with the demon and the army of his own replicas. Kali eventually defeated him by sucking his blood before it could reach the ground. Raktabija, along with his army of duplicates, were all finished. Her winning trophies were the several heads of the devil around her neck.

In euphoria, she went into a wild dance. The more she danced, the wilder and turbulent it became. She was rampaging out of control. Her dancing swirls became so powerful that there was a fear Kali could destroy the world.

In that situation, Lord Shiva was sent to calm Kali down. He was successful but was stomped under her left foot. The forceful wild dance came to a halt. And the world was saved by Lord Shiva, who is himself attributed as lord of destruction.

Kali is often portrayed standing or dancing on Lord Shiva, who lies calm and prostrate beneath her foot. Acclaimed mythological artist Raja Ravi Varma captures the dance scene in one of his most famous paintings. Here Lord Shiva, one of Trinity Hindu gods, the others being Brahma and Vishnu, is seen under her foot.

Kali’s unusual portrayal in her body wears, wild and vicious looks, and the vigorous victory dance while Lord Shiva, a God himself, under her foot, are the materials for an interpretive view of her to establish what she represents.

Kali is a Hindu goddess of death, time, and destruction. She is the Shakti, representing the divine feminine power. Kali is like a mad storm, a typhoon, or a wildfire who, while in her furious crusade, does not spare anybody. She is a force of nature where her actions or motives are mystified as they defy reasons and explanations.

Kali is independent and not worried about the results of her actions. Her moves can’t be disciplined. She is a demon slayer, and her psyche represents justifiable female resentment and rage.

Although she is paired with Parvati, the wife of Lord Shiva. But here as Kali, she represents a personality that is dark, wild, and angry. Her other image as being Parvati or goddess Gauri is that of calm and tranquil temperament.

In this duality, and with her four, eight, or ten arms that carry a mix of belligerent and luminous symbolisms, Kali represents womanhood in multi portraits. The many roles contemporary woman juggles, the challenges, and the fights or battles she undertakes are what goddess Kali represents.

She is a symbol of contemporary womanhood, especially in the West. Kali was on the cover page of the first edition of Ms. Magazine. Its artist Miriam Wosk drew a colorful illustration featuring a pregnant woman with eight arms symbolizing the multi-tasking role of women now and for generations. Rolling Stones, the English rock band, had its logo of “tongue and lip design” adopted out of the stuck out tongue of Kali.

Despite her portrayed terrible look, Kali is considered the kindest and loving goddess. Ma-Kali, mother Kali, is her revered status in the iconology of Hindu gods. She is regarded as the mother of the entire universe, and a divine protector.

Kali is a free goddess who is ready to fight the evil in any Yuga.

(Promod Puri is a journalist, writer, and author of Hinduism Beyond Rituals, Customs, And Traditions.)