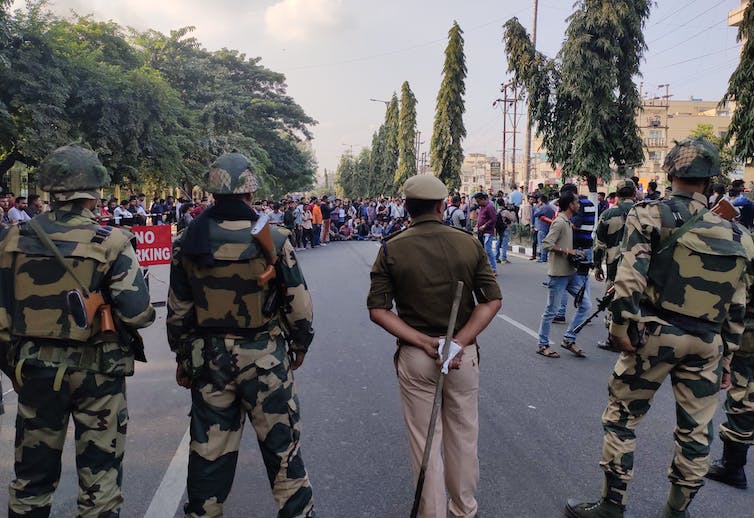 Protests have engulfed Assam since the National Register of Citizens was published in August 2019. They have intensified since the Citizenship Amendment Act was passed by the parliament. Central security forces, pictured here, have been sent in to repress the spontaneous protests by different citizens groups. (Arunabh Saikia),

Nearly two million residents of India’s eastern state of Assam are at risk of losing citizenship. The National Register of Citizens (NRC) published by the state government in August 2019 declares people who cannot prove they came to the state before March 1971, the day before neighbouring Bangladesh declared independence from Pakistan, to be foreigners.

According to Fernand de Varennes, the UN Special Rapporteur on Minority Issues, this is potentially “the biggest exercise in statelessness since the Second World War.” Those excluded are primarily poor and marginalized people who can not adequately prove their citizenship.

As the 120 days granted to appeal for those excluded from the National Register of Citizens in Assam comes to an end, Prime Minister Narendra Modi and Home Minister Amit Shah have announced they will implement the NRC across the country. This catastrophic move is part of a broader state project to unravel the secular, inclusive basis of citizenship in India by targeting the country’s Muslim minority and other marginalized communities.

Included in their plan is the unilateral repeal of Kashmir’s constitutional self-determination in August 2019, and the Citizenship Amendment Act passed in December 2019, which omits Muslim migrants from obtaining naturalized citizenship.

Seeking out “illegal migrants” — which in India has become synonymous with “Bangladeshi Muslim” — the National Register of Citizens has torn apart families as some members find themselves excluded from the list. Reports indicate a gendered dimension to this exclusion, with women suffering most from this bureaucratic violence and in detention.

When Dulal Paul, a man in a detention camp in Tezpur, Assam, died in October 2019, his kin in India refused to accept his body. Since Indian authorities had, they said, declared Paul to be a “foreigner” and “a Bangladeshi,” Paul’s family asked them to send his body to Bangladesh. They forced the authorities to acknowledge the fatal inconsistencies within their own system. Bangladesh, meanwhile, insists that it has no citizens living illegally in India.

Many excluded from the NRC have no claim to citizenship elsewhere. Our research shows that South Asia’s historically flexible borders mean that many who have lived their entire lives in India may not have the full complement of documentary evidence to prove it. The practice of recording births and marriages is relatively recent, and even those who have documents have been excluded because of minor inconsistencies in the spelling of names or dates of birth. Regardless of documentary proof, those people had no reason to think they would ever be required to produce evidence. They had established livelihoods and relationships in their Indian communities — and there was nowhere else they could call home.

Migration and the question of who belongs has been central to Assam’s politics since the very inception of postcolonial India’s citizenship acts. Militarized borders have become a focal point to unify and stoke disparate anxieties around minorities and majoritarian identity, just as they have with Brexit in the United Kingdom and the detention and separation of families at the United States-Mexico border.

The rise of Hindutva nationalism

The Assam Agitation of 1979-85 demanded the detection and deportation of all “foreigners” regardless of religion or ethnicity. The regional political history of Assam has dovetailed uneasily with the rise of Hindutva nationalism. Their leaders have pledged to detect and deport Muslim “illegal immigrants.”

The religious basis of the NRC becomes explicit with the Citizenship Amendment Act (CAA) just approved by the parliament. That law ensures that Hindus, Sikhs, Jains, Buddhists, Parsis or Jains facing persecution in neighbouring countries will be eligible for citizenship in India and not treated as illegal migrants while Muslims will be excluded. This imminent constitutional change is a radical transformation of the secular principles of citizenship in India.

Political theorists have rightly suggested that the NRC and the Citizenship Amendment Act must be considered together to grasp the ramifications for India’s secular democracy. The ongoing siege in Kashmir is also a critical part of this equation.

States today deploy techniques of both forced inclusion (for example, the so-called “re-education centres” for Uighur Muslims in China) and forced exclusion (the U.S. Immigration Customs Enforcement deportation of undocumented immigrants, and EU processing centres in Turkey and Africa to keep migrants from reaching Europe) to address majoritarian demands around the perceived problems of mobility and difference. Both strategies are on show simultaneously in India.

Also, in August 2019, the Indian government unilaterally repealed constitutional provisions for autonomy in the state of Jammu and Kashmir — India’s only Muslim-majority state — amid a military siege and complete communication shutdown and curfew, much of which continues to date. Kashmiris have been forcibly included in the Indian polity through a downgrading of their self-governing federal state to a centrally governed Union Territory.

In contrast to Assam, where people are forcibly excluded when they cannot meet the high bar for verifiable documents that demonstrate their residence in the region before 1971, this forcible integration is in complete denial of Kashmiri demands for azadi, freedom.

Both actions reveal an Indian state intent on weaponizing the bureaucratic logic of citizenship as a strategy for securing its borders. The nation has been working to radically reshape its secular polity along Hindu nationalist lines by expelling or repressing Muslim minorities. Dissent against the CAA and the attack on secularism is being violently quelled by the government, particularly on university campuses across the country, including in Delhi.

Protesting against human rights violations in all of these locations — both already perpetrated and yet to come — is critical. But effective long-term political action, within India and elsewhere, must address shared structural concerns in Assam and Kashmir where profoundly exclusionary forms of Hindu nationalism seek to strip certain kinds of people of demographic and political power.

Those committed to justice and fighting fascism must recognize and reject the linked logics of weaponized citizenship in Kashmir and Assam. Experiences there are neither isolated nor exceptional; instead, these margins have long been subjected to the violent repression that has moved to India’s centres today.

[ Expertise in your inbox. Sign up for The Conversation’s newsletter and get a digest of academic takes on today’s news, every day. ]